The 5 Most Common Jobs in a Medieval City 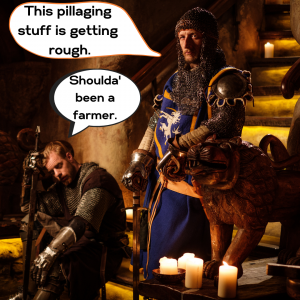 I found this fascinating article from Medievalists (dot) net about the most common jobs in a late medieval city. This piece used 15-century Montpellier, a city located in the South of France, as the case study.

The author looked at tax records dated 1435-1446 in which a little under 2.2K households are listed. The profession of the head-householder is known in 2/3 of the cases. A handful of women who helmed their own households also declared a profession to the city’s authorities.

Dozens and dozens of occupations existed at once in the city, a result of the great fragmentation of chains of production in the Middle Ages. The 5 most common jobs were (in order of ranking):

🪚 Carpentry: The “fustiers” only made up 6% of the taxpayers whose occupation was known in 1435-46 (81 individuals, including a woman).

🔪 Butchery: The Montpellier butchers made up 4% of the 1435-46 taxpayers whose occupation was known. During that period of time, some 60 butchers labored at once in the city, for a population of fewer than 20K people–1 butcher for 300 inhabitants, approximately. Also fun fact, 55% sold mutton meat, 35% sold beef, and 10% sold pork.

👞 Shoemaking: The Montpellier cobblers, who made and repaired shoes, were quite numerous, making up 4% of the workers paying taxes in 1435-46.

⛪ Church-related work: Clerics made up a little under 4% of the taxpayers with a known profession. In England, the Poll Tax records of 1377 showed that 2% of the households were clerical.

Here are the sixth to tenth most common jobs in late medieval Montpellier, according to the 1435-46 tax records (in order of ranking):

The article has looked at the most common jobs based on the sheer number of occurrences of occupational titles. But, due to the great fragmentation of chains of production in the Middle Ages, the distribution of occupational titles does not reflect the size or importance of a given industry.

For instance, none of the top-5 jobs includes workers in the textile industry, although textile production represented a major source of income for the people of Montpellier.

Weavers, shearers, dyers, drapers, even tailors, cotton makers, embroidered, and needle makers were all part of the industry.

In terms of industry size, food production and retail, textile work, construction work, and international trade were the main employment sectors of the late medieval city.

What are your thoughts? Chime in over here, leave a note!